46° CANTIERE INTERNAZIONALE D'ARTE, FROM 15 OF JULY TO 1 OF AUGUST, THE EDITION BY MAURO MONTALBETTI 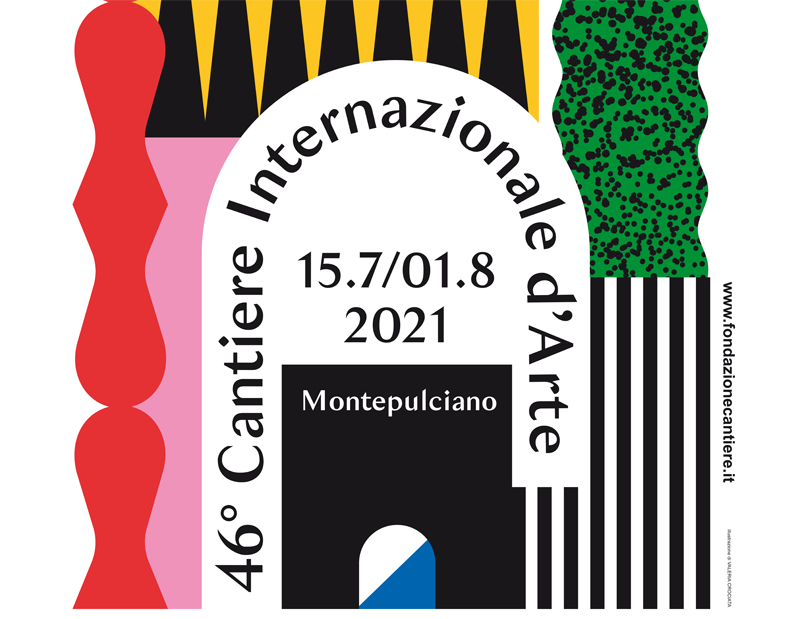 The Cantiere Internazionale d'Arte presents its 46th edition with new artistic director Mauro Montalbetti and the musical directio of Antonio Greco. From July 15 to August 1, 2021 there will be 35 performances spread across Montepulciano and the Valdichiana.

"Music, theatre, dance - explains Montalbetti - enter into a relationship with people, society, the territory: Hans Werner Henze created the Cantiere Internazionale d'Arte di Montepulciano on this belief and I have built my career as a composer and also this new adventure in such a prestigious artistic direction sharing that same vision.”

This season, subtle filigree connections link the programmes, many of which feature bold juxtapositions, unprecedented dialogues to invite reflection and generate comparisons between different idioms and poetry. Renewing the collaboration between new talents and established artists, the event is supported by MiC, Regione Toscana, Comune di Montepulciano and Consorzio del Vino Nobile di Montepulciano. With a particular sensitivity to contemporary forms, there are many new works commissioned from innovative authors. Starting from the epicenter of Montepulciano, the schedule involves the municipalities of Cetona, Chianciano Terme, San Casciano dei Bagni, Sarteano, Sinalunga, Torrita di Siena, Trequanda.

Children of a drunken god is a hybrid production between baroque music, contemporary dance and acting. The project is headed by Michela Lucenti (choreographer for Martone/Gatti's La Traviata broadcast by Rai3). In Piazza Grande, 11 actor-dancers of Balletto Civile, aged between 9 and 76, express the movement of bodies inspired by baroque art, interpreting anti-heroes from the world’s forgotten corners; the musical part of the Ensemble Cremona Antiqua, directed by Antonio Greco, is focused on madrigals and cantatas by Monteverdi, Salomone Rossi, Barbara Strozzi and Isabella Leonarda. With strong collaboration between different subjects, the show is already on programme in several squares. In co-production with Teatro Piemonte Europa (July 16).

Premiering at the Teatro Poliziano, July 31 and August 1, the opera commissioned from composer Federico Gardella and playwright Cecilia Ligorio, who also wrote and directed a work inspired by Arthur Schnitzler. Else, in co-production with Fondazione I teatri di Reggio Emilia and in collaboration with Accademia di Belle Arti di Macerata, points to the abuse of power over intimacy as a disease of our time.

Four evenings for symphonic and orchestral ensembles, three in Piazza Grande, one in the Temple of San Biagio: featuring world-acclaimed professionals and up and coming players, classical works interact with new ideas. After the 2020 performance broadcast on Rai Radio3, the Orchestra della Toscana redoubles its commitment to the Cantiere. First, with conductor Antonio Greco, it will follow a classical path, from Händel to Haydn (with the elaboration of the mourning period) up to a liberating Beethoven with the Trio Kanon (July 18).

Then the ORT returns under the inspiring conducting of Markus Stenz, who opens with Stravinsky, followed by an in-depth study of Brahms (Symphony No. 1) and the related Fantasy conceived by Detlev Glanert (July 30).

The Orchestra Poliziana will be playing, as befits the principles of the Cantiere, with leading artists. At the Temple of San Biagio, on July 24, under the direction of Antonio Greco, the local ensemble presents the premiere of the piece Ecco sparir le stelle commissioned to Carlo Boccadoro, while in the second part the Corale Poliziana will perform two masterpieces by Antonio Vivaldi, the Gloria in D major and the Credo in E minor; the solo roles are assigned to Valeria La Grotta (soprano) and Anna Bessi (mezzo-soprano).

The young ensemble from Montepulciano also tackles the popular Closing Concert under the direction of Antonio Greco, who will present for the final event a journey through French music with Pelleas et Melisande and Fauré's Pavane and Ravel's Pavane pour un enfante défunte, and then finishes with Ludwig van Beethoven's Piano Concerto No. 1 with the extraordinary participation of Davide Cabassi as soloist.

Dedicated to the story of the Danish artist, icon of transgender rights, Lili Elbe Show is the new choreographic creation commissioned to Riva & Repele: in addition to Sasha Riva and Simone Repele, the world famous Silvia Azzoni (already starring with Roberto Bolle), Yumi Aizawa, Jamal Callender and local dance school students will be on stage. Bach's music and Paolo Gorini's new composition will be performed by the Orchestra Giovanile Italiana, thus strengthening the synergy with the Scuola di Musica di Fiesole; on the podium of Piazza Grande will be Marc Niemann, nominated as the best conductor in Germany by German critics in 2018. Such an ambitious project boasts the artistic coordination of Azzurra Di Meco, the collaboration of Accademia della Belle Arti Santa Giulia and Guido Levi lighting lab, a programme for the promoting the craft of stage lighting among young people, named after the well-known light designer (July 29).

Centanni is the co-production with Nuova Accademia degli Arrischianti staged at the atmospheric Castle of Sarteano from 15th to 18th July; Laura Fatini writes, and together with Gabriele Valentini also directs, a show that alludes to The Sleeping Beauty: an awakening that is the metaphor of today's return to reality after a long sleep. The music was commissioned to Giovanni Vannoni, 29 years old and already praised by critics.

Other commissions of new avant-garde music pertain to site-specific projects. Davide Vannuccini will work with electronic sequences among the contemporary geometries of the Cantina Dei. While Maurizio Rinaldi records the soundscape of the Riserva del Lago di Montepulciano where the sounds of nature become musical expression and thought in the performance entitled Equilibri.

The artistic personalities of Michele Campanella and Monica Leone offer a concert for two pianos set up to pay homage to the fiftieth anniversary of the death of Igor Stravinsky (Circus Polka, Concerto for two pianos, Tango), with the finale focusing instead on Sergej Rachmaninov (Suite for two pianos n. 2); the unusual context of the Cloister of Sant'Agnese (July 21) will host these accomplished pianists.

Another virtuoso of the keyboard is Davide Cabassi, one of the most sought-after soloists in the world who, before the Closing Concert, will perform a recital of works by Henze, Crumb, Castiglioni and Mussorgskij (July 29).

The Cantiere Internazionale d'Arte encourages the current artistic generation to create original works that are central to the programming to ensure space for contemporary music. In addition to opera, dance and theatre, there are many commissions and premieres: while authors such as Carlo Boccadoro and Andrea Molino have a well-recognised artistic stature, other moments are reserved for the younger Elvira Muratore, Luca Benatti and Matteo Belli. There will also be the artistic residence of the Ensemble degli Intrigati, a young ensemble sponsored by the Fondazione Cantiere who specialise in the contemporary repertoire, and who will perform two concerts following advanced studies with Andrea Molino.

For the well-desrved celebration of Dante Alighieri there is Vox in Bestia: A handbook of divine animals with Laura Catrani performing texts by Tiziano Scarpa in a contemporary vocal style, and video animations by Gianluigi Toccafondo, exploring a Dantean bestiary (July 23).

The centenary of the birth of Astor Piazzolla, however, is remembered with two different concerts: Flores de alma orquesta minimal is the classic quintet-Piazzolla which has been allocated the prestigious Piazza Grande, while Luigi Attademo transcribes for solo guitar songs of the Argentine author, alternating them with current titles in an aesthetically unique counterpoint (July 24).

Among the new initiatives of the 46th Cantiere Internazionale d'Arte are the two different types of lectures on musical themes. On July 23, at the Enoliteca of the Fortezza, Carlo Boccadoro presents his Bach Prince vite parallele (Einaudi), inspired by the journalist Andrea Penna. On July 28, the Cortile delle Carceri will host a debate with the musicologist Federica Marsico on her book La seduzione queer di Fedra. Il mito secondo Britten, Bussotti e Henze (Aracne), an insight into the fluidity of gender expressed in the scenic and musical elaborations of significant composers, including the founder of the Cantiere.

Among the most prominent companies of the Italian theater, Il Mulino di Amleto promotes a workshop of scenic art starting from the figure of Molly Bloom, a character of Ulysses by James Joyce; under the aegis of Marco Lorenzi, the participating actors and singers will give life to a performance in the form of a workshop on July 31.

In a musical metonymy, Giuseppe Verdi's opera finds a new interpretation with the L'Usignolo ensemble that performs a whimsical reinterpretation, with an orchestration based on the origins of ballroom dancing. This leads to a down-to-earth interpretation of the opera (July 28-29).

Valeria Crociata is the artist, illustrator and designer who created the poster for the 46th Cantiere Internazionale d'Arte: will show in a distinctly urban exhibition, the originality of the works produced by a creative talent appreciated in the fields of visual arts and communication.

The concert programme of the Cantiere Internazionale d'Arte also includes the festive prologue with the Bande della Valdichiana, the Ensemble Barocco di Napoli with Il sogno di Pan. The flute between Naples and Venice in the 18th century that features the master of the transverse flute Tommaso Rossi, the talented pianist Giulia Toniolo, the solo violin of Daniele Richiedei between folk and improvisation, the contemporary quality of the Trio Hegel and the jazz flair of the Giorgio Ferrara Trio.